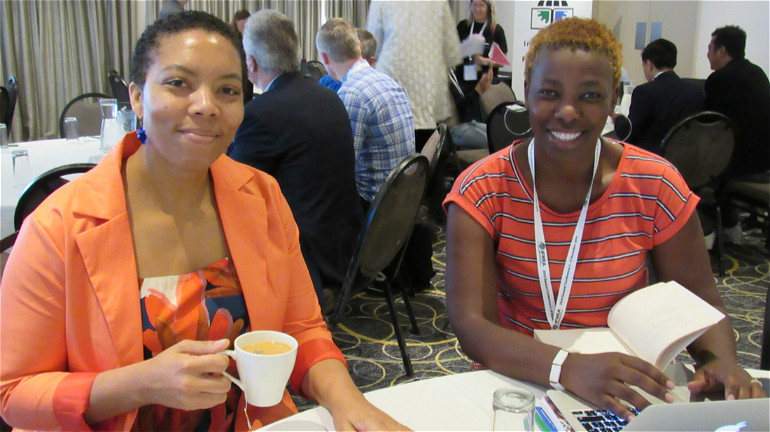 The IFWEA 23RD General Conference 2019 at the Holiday Inn in Cape Town, South Africa was formally opened by IFWEA President Sue Schurman, Distinguished Professor of Labor Studies and Employment Relations at the Rutgers School of Management and Labor Relations. Greeting delegates with a comradely “Viva”, she spoke about how the conference would be arranged around the theme “Education for social change: Popular not Populist”.

She said: “We meet at a time that is more critical to our mission than ever in my lifetime. The forces of right wing populism are spreading all across the world. I come from the USA, and I don’t want to mention the source of populism in our country except it starts with T and rhymes with rump.

But it’s not just in the USA. We will also hear in the conference about the crisis of xenophobia, which is worldwide and growing. It is something we have talked about in IFWEA for more than a decade, we saw this long before it reached the mainstream. Confronting right wing – and even left wing – populism, one is reminded that this can be no substitution for a democratic society.”

She added: “Democracy is a learned pattern of behaviour. Our task is to teach this behaviour.”

At this IFWEA conference delegates would hear a lot about the theory of change, Sue said, quoting “there nothing so practical as a good theory,” and reminding delegates that “a strategy is a theory, and a theory is a strategy”.

She ended with a humorous reminder about being on time for the conference. “I was a bus driver in my youth, and drivers are penalised for being late or being early, so time-keeping is of the essence.”

This was followed by a video greeting from Karl Petter Thorwaldsson, ITUC Vice President and former member of the IFWEA board, who said:

“I would love to be in Cape Town for the IFWEA congress, but I need to be home in Sweden fighting for salaries and pensions. I have beautiful memories of activities in IFWEA, having made friends from all over the world, and helping adults strive for better education. I especially remember the last conference in Cape Town, particularly the singing competition, which of course Sweden won!  On a more serious note, changes in our work places are getting more dramatic, and we need to have more education to face these challenges. Here IFWEA plays such an important role. Good luck with the congress.”

Myrtle Witbooi, President of the IDWF and General Secretary of SADSAWU, officially extended a warm welcome to all delegates on behalf of IFWEA, with special greetings from SADSAWU.

“Here we are in Cape Town – where you can see beautiful Table Mountain, our beacon of hope. In the morning when we get up, we look at the mountain and can see whether it’s going to rain or storm, or it’s going to shine. When you go up the mountain, you can see the diversity in the city some stay in the sun, others in the shadows. You see also see Robben Island, where Nelson Mandela spent 27 years of his life.”

She continued: “At this conference, we are going to look at justice and equality, and worker freedoms. You are going to debate, to look at how we can bring education to the poorest, especially when we look at how technology is taking over the world. We must ask, is the working class moving with the technology? Yes, domestic workers have cell phones – but do we really know how to use them?”

Myrtle asked delegates to “think how we can move those vulnerable workers, and get them into the mainstream. We are also looking at leadership – we need to prepare the next generation to take over. Knowledge is too important to leave in the hands of the bosses, is what we say.”

She concluded: “Together, we are going to move mountains. I hope that the decisions that you make here at the conference, will show that you take education to heart, for those on the ground.”

All voted for and adopted 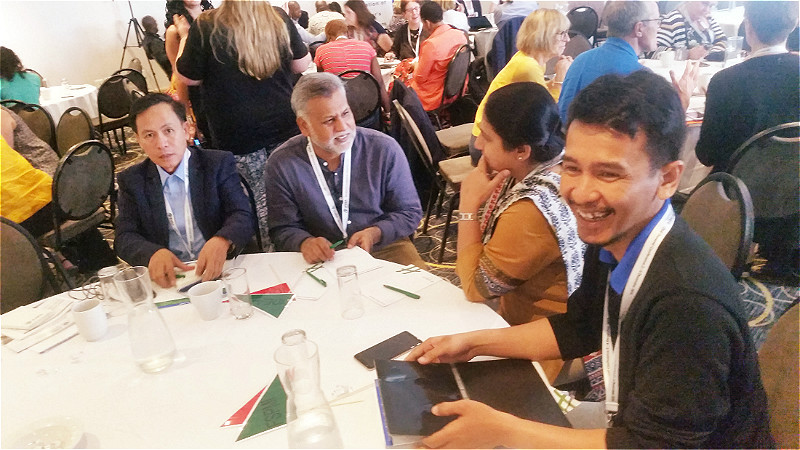 “Tell me the facts and I’ll learn. Tell me the truth and I’ll believe. But tell me a story and it will live in my heart together” – Ancient Proverb

“It’s a human need to be told stories.”

“We use stories to inspire, to change hearts and minds.”

Carla Katz of Rutgers School of Management and Labor Relations, who is also a storyteller and stand-up comedian, shared the essential elements of creating and telling a good story, which included:

Delegates were shown a video of Adam Wade: The Hoboken Roast Beef Story.

Other points to remember when storytelling were that a story must have a beginning, middle, end and an arc. It must have a moment of transformation. It must have stakes. It must be true, as it is personal, and it is your story.

Most important to keep in mind was the five-second moment in a person’s life. That moment when you or somebody else fundamentally changes.

Delegates were shown a video of Nester Gomez, a storyteller who travels all over the US.

As a participative assignment, delegates divided into groups of four to five people. Each group was to choose a prompt/theme. Individuals would have ten minutes to prepare a story, then four minutes to tell it to their group.

Adrienne Eaton started this session by providing background to the global project on drivers and the informal driving sector. Presenters focused on three areas:

The formalisation of public transport (Uganda, Philippines and the UK).

The workshop used the Bluejeans platform to allow presenters and participants both from the conference and from remote locations (not in Cape Town, South Africa) to participate in discussions and debates.

Contributors discussed the challenges faced as well as the triumphs achieved through organising in the informal driver sector, as well as the threats facing drivers in the formal/traditional sector. 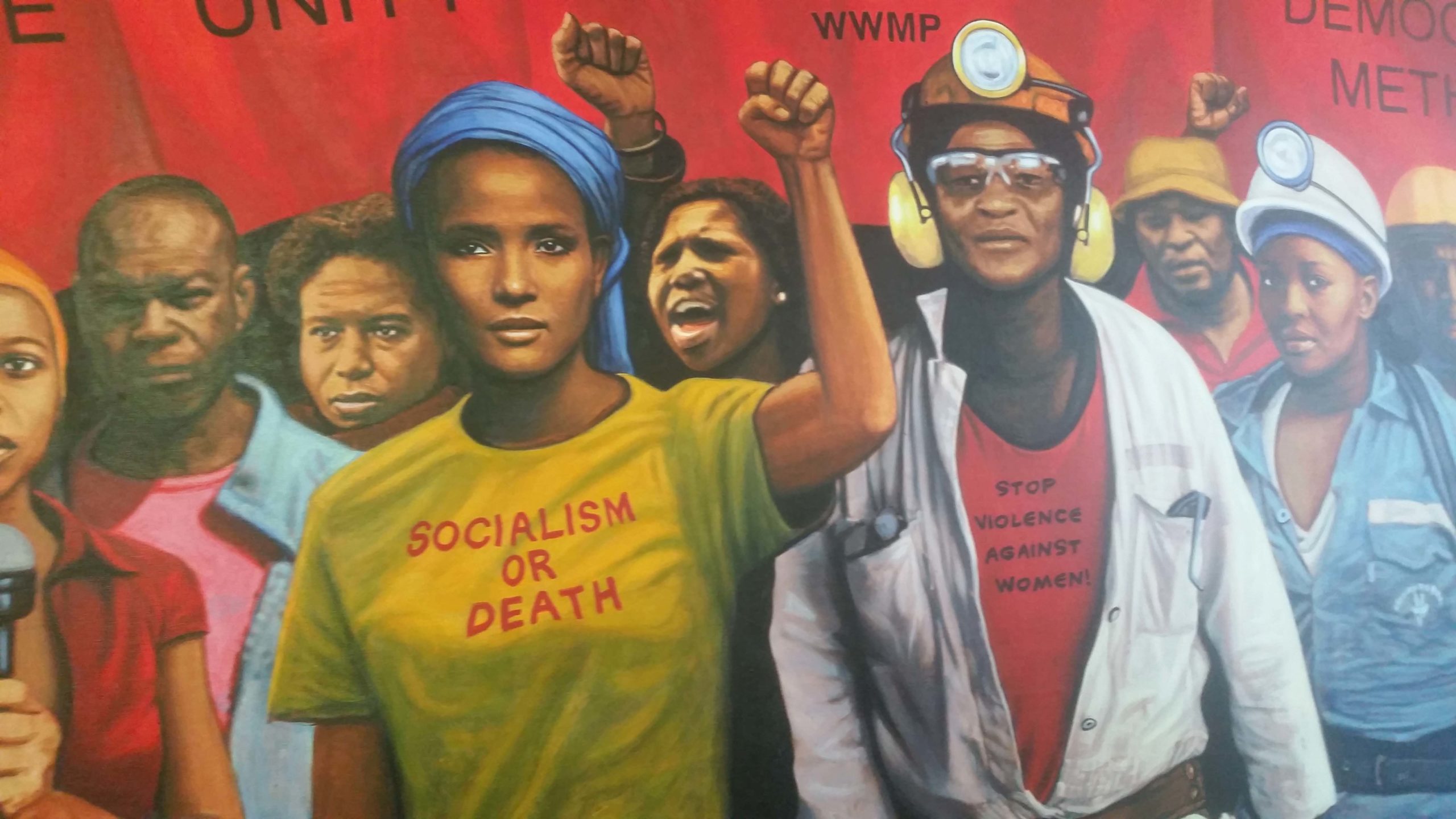 Forty delegates were bussed to Khayelitsha and Salt River for an informative Social Activist Tour guided by Helga Jansen-Daugbjerg. Participants were welcomed to The Isivivana Centre by Lunga Guza, a coordinator and fieldworker of Worker’s World Media Productions, an independent labour movement media project with a reach across Africa.

Embracing the challenge of airing worker issues, WWMP presents a weekly 30-minute show on SAFM Radio. They also collaborate with worker federations, have an advice office and facilitate discussion groups. They’ve produced a documentary, titled Freedom is Not Free.

WWMP host community forums that try minimise strike action, and offer free training to shop stewards and worker representatives. They intend doing a visibility study with a view to getting a 24-hour radio show focusing solely on labour issues. To get a feel of Isivivana Centre activities, delegates were divided into four tour groups.

Community House came to symbolise the collective spirit of struggle at the height of apartheid in the 1980s, and a visit to this iconic Salt River site emphasised the role activists played liberating South Africa. Fallen heroes include Neil Aggett, Jeannette Schoon, Ashley Kriel and Iman Abdullah Haron, who adorn the walls along with eye-catching murals which highlight community experience and the struggle for social justice.

A building housing numerous NGOs, trade union and civic organisations, IFWEA’s Secretariat Office has a strong presence at this activist heritage site. Ending with a tour of IFWEA’s impressive library, delegates returned to explore the city.