Day Three of the IFWEA 23rd General Conference 2019 was opened with a storytelling session moderated by Carla Katz. First to tell her tale was Namrata Bali from IASEW in India, who spoke about her experience during a drought when the women of her village were required to cook and clean for a visiting group of men from the council. But the women had many other chores to do, so they didn’t. They were slapped with two bans – a 10 000 rupee fine, and the women were not allowed to leave their homes. But they didn’t take it quietly. “The lesson that I learnt was that even if you think you don’t have a voice, women can still use their powers,” she said. 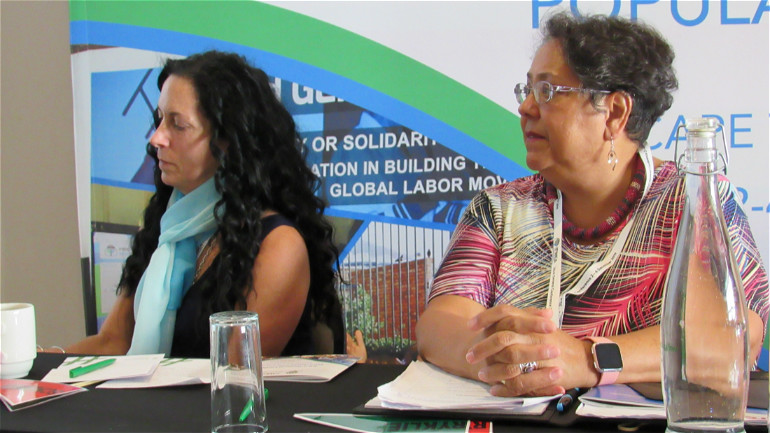 Fiona Gandiwa Magaya from ZCTU in Zimbabwe said: “I used to think that to be a good woman, I must be married and be nice to my husband. So I did that, and life was good – but then my husband started restricting me in terms of time and where I could go. And then he became violent. I would have bruises from him, but I would lie to others and say I bumped myself on a door. In 1995 I joined the union, and got training. I realised I lacked the confidence to speak out. MY life changed. Today, I am happy – I got divorced, and I learnt to speak out for myself, for my children, for the voiceless.”

Lynne Dodson from ESC in the USA said: “I’ve had lots of ‘aha’ moments in my life – and this was one. I was charged with helping to organise a rally/march in Seattle during the WTO. On the day of the rally, there were thousands of unionists in town, and we left the stadium to march. But the authorities were waiting with tear gas and stun grenades – so we thought we should turn around. But then we thought imagine if we, 80 000 of us, marched downtown together, to join up with our students who were waiting for us. Eventually 1000 of us went downtown. I was scared. But we shut the WTO down. And it reminded me of one of my favourite quotes by Audre Lorde: ‘When I use my strength in the service of my vision, then it becomes less and less important whether I am afraid.’ ”

Pao and Nimol Vorn from Cambodia told a story about helping a woman getting an agreement with the owner of the market where she worked, teaching her to negotiate, to know her rights, to join a union.

Kirsi Maki from TSL Finland told her Finland story: “This is a story about learning disabilities. I used to work at a university before TSL. I used to lecture. At TSL I my first course I ran was on training for trainers. I was careful not to act like a university lecturer. But my time management was awful. For example, I assumed my students knew how to use an iPad, and if they didn’t it took long to show them. I also asked them to read two or three page of work, but for some it took quick, for others it took longer, which was embarrassing for them. On the 4th day, I decided to share a secret with the students – I have dyslexia, which I had hidden from the university all those years. It was liberating to admit this. For the first time I felt I was a trade union trainer, not a university lecturer anymore.  We spoke about learning disabilities, and I felt we were all on the same side. It was very empowering.”

This workshop is a participatory introduction to Activist Economics, an online course in IFWEA’s Foundation Skills for Social Change certificate programme. This introductory workshop explores contrasts between orthodox economics and a more socially-conscious political economy. It also provides tools and perspectives to strengthen arguments for a more democratic economy.

The Activist Economics course can be found on OLA by clicking here.

Aims of the first session:

Aims of the second session:

Sharing and discussing – what does economics mean to you?

Delegates were asked how many offered courses which fostered a critical or emancipatory economic perspective? Responses included:

Namrata Bali from  IASEW says they offer a very basic course on the informal economy, the formal economy and women’s contribution to the economy.

Nina Tatiana Langat from LEARN in the Philippines say they offer basic courses not necessarily focused on economics, but on co-operatives, and an analysis of economic systems in relation to co-operatives.

The conference was broken up into small groups, with delegates being asked to discuss the following topic – What do you want from the economy that you are not getting, and what is in the way of you not getting it?

“Economics is just too complicated and people don’t understand it.”

There is supposedly a scarcity of jobs and resources – this myth is deliberate and perpetuated even from school level, and sued as a tool. This is not scientific it is political.”

“Myth: economics is for the clever people, it’s difficult. We should be finding ways to mainstream our own innovative approach on economics.”

“The gig economy is a threat to the Nordic model, and both politicians and unionists need to be better prepared.”

“Myth: To provide the growing demand for energy, it is too expensive to switch to alternative energy.”

“Myth: If you do not have an employer, you are not a worker and cannot make demands like a worker.”

“The understanding economics was quite high in our group, and people could see the benefits of participating and understanding the economy.”

“Myth: Trade unions disrupt the economy, are lazy and whine. Truth: Workers should be able to decide how wealth is distributed.”

“Myth: Governments keep wages down to keep the economy afloat.” 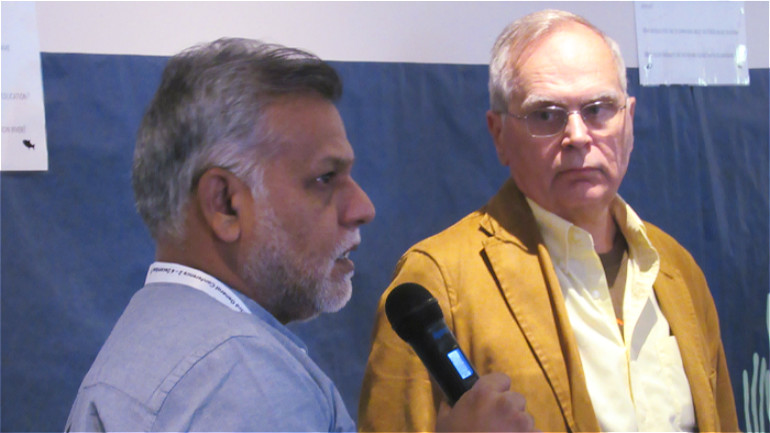 Elementary forms of cooperation and exchange: Definitions and implications

An introduction to an analytic framework that was developed because of anthropological experience.

Exercise: What belongs in these categories, and what is missing.

Dr Merrill pointed out that an economic debate in a conventional setting would be dominated by “economics experts”, but the setting he was creating, at the conference, was designed to break down these barriers .

Closure of emergency motions to conference.

General Secretary Sahra Ryklief presented the strategy proposal for the next four years:

Vision: A world where all working people have access to lifelong learning opportunities which enable them to claim and exercise their inalienable democratic rights, responsibilities and freedoms as global citizens. (Stays the same.)

Mission Statement: IFWEA is building a global knowledge community.  We facilitate global co-operation between worker educators so as to advance the frontiers of knowledge, education methodology and practice.  Our beneficiaries are democratic worker organisations promoting freedom, justice and equality for all. (Stays the same.)

Space (the where): Online, Study Circles, Workshops and Conferences, YGAP.

Process (the how): Popular and participatory education methods, Dialogues, Guidance and mentorship, Facilitating the sharing of life, work and organisation experience.

1: Advancing trade union policies on protections, regulations and livelihoods in informal and vulnerable forms of work.

We have built the foundation to do this.

Additionally: We require an emphatic rejection of corruption 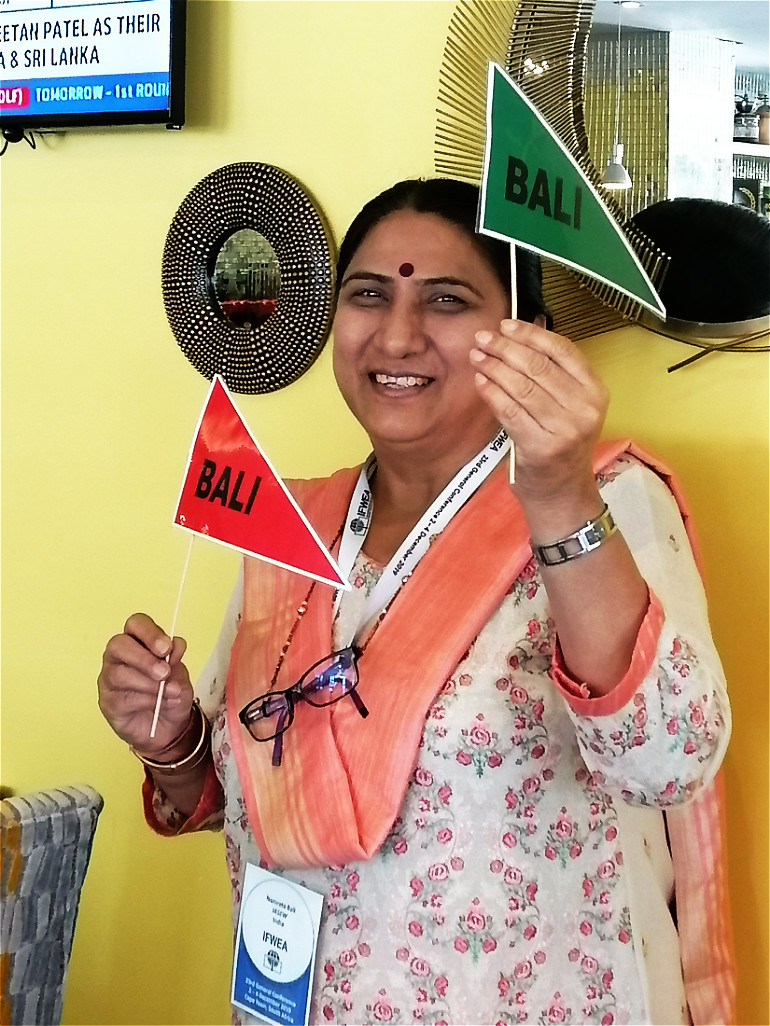 What do you think will work about the strategic plan?

What do you think is NOT relevant?

Do you think your organisation can benefit/contribute from/to the plan?

Report from the Resolutions Committee 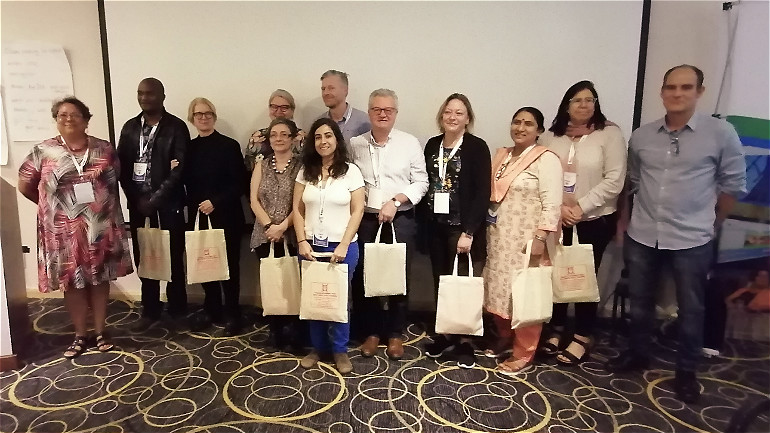 Sue Schurman and Sahra Ryklief made the closing speeches for the IFWEA 23rd General Conference 2019.

General Secretary Sahra Ryklief she said was privileged to have the opportunity to give a vote of thanks. Firstly, she thanked the delegates and affiliates in the room. She said she felt energised by the conference. Also, she gave huge thanks to the Olaf Palme Centre, who made such a big contribution to the conference. Then she thanked the IFWEA Conference Team, all those who contributed to the Conference Programme, to the newly elected Executive Committee members, and those who would be leaving the committee. Finally, a huge vote of thanks to the staff at the hotel – who are not unionised.

President Sue Schurman said that if one has people, talented people, committed to fighting injustice, then one has the resources to get more resources that are needed. And we have the ability to become truly global. We know how to build movements, we know how to organise – and for those who’ve forgotten, we have been reminded how to organise, once again, by what is happening in the world. We have lost a lot of our rich affiliates from the north – our task now is to overcome that. There is so much content – but content is just words unless we are sure of how to frame them, in a way that embodies our values. Populists know to bypass the thinking brain and will tell you who to be angry at, and how. We don’t work that way – we are all members of a much bigger group – the human family. There is no other organisation out there that is thinking about this – this is it. Though we have grown, we must grow bigger and stronger.