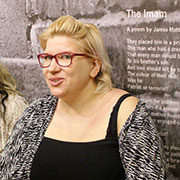 
Milla Grunland attended the Youth Globalisation Awareness Programme as a participant in 2014 from Työväen Sivistysliitto (TSL). From 2015 to 2017 she worked as the Finnish YGAP co-ordinator, and currently studies journalism. Here she shares her reflections on the programme over this time.

On her first experience of attending YGAP:

I came for the first time in 2014, and at that time I worked as a waitress in one fine-dining restaurant. I expected to have a really huge cultural shock when arriving here but it actually wasn’t what I thought, since I realised Cape Town is actually a Western kind of place. But the shock came from the inequality that I saw, that I knew that it exists, but I didn’t have a real idea how bad it is.

On the internship with the affiliate organisation Women on Farms Project:

I got to visit farms and saw the conditions that farmworkers live in, and I saw where the wine in South Africa still comes from. And it was quite a big thing to go back to my life in Finland and to sell these wines to people who have a lot of money.

On the impact of YGAP that leads to a life-changing decision:

So that’s when I realised that I want to do something else, and I’d like to study journalism. So, I want to say that it was really a life changing experience.

On why she chose journalism for social change:

Well, I think the main thing is that you can be creative with journalism. So, you can talk about facts, you can change the world, but you can do it in quite an interesting way. What I actually want to do as a journalist is to really tell the stories, and not take space away from people whose voice should be heard. But to give them the space, and to be the one who actually gives them the platform, where you can share your experience and tell what should be done differently.

On why media freedom is important for the labour movement and young workers:

Media freedom issues are the same wherever you go in the world, it’s the problem with capitalism, to actually have whoever owns the magazine or whatever , that they have a word to say about what you are going to publish. And basically that’s not often really what should be told, that is - what are the problems with labour movement, with workers’ rights and everything. The media has changed a lot - for my parents it’s really different then it is for my generation, and so for the younger ones. For my parents it used to be so if something is written in the newspaper then it’s a fact. Today we are actually dealing with fake news and fake facts, and that’s a really big issue. That’s something that we need to teach young people to really understand - how to read the news, and what to trust and where to find the real facts.

On why media freedom is the voice of the people:

The free media is the place where peoples’ voice should be heard, and if the media isn’t free then it’s not actually going to change anything. And that’s the thing with media, what we should be doing is to find the thing that is strong, and to start the change. And I think that media can actually be the one to change things, but in media we put up things that are wrong and it’s important that it should be changed.

On the impact of YGAP for personal growth:

It’s been really life changing, and it’s been a place for me for personal growth. And, the first time I came here as a co-ordinator I did something that I have never done, no-one had actually taught me how to do, how to go through with it, and it was difficult. I needed to really get to know myself, and to understand how I feel, why I do stuff like that, and also how I reflect my behaviour on other people, and that’s been really important. And now that I think, this is my third year as the co-ordinator, fourth year in all and if I think about myself now, I think I am much more confident and much calmer than the two years before. And that’s something I really appreciate and I am so happy that I got the opportunity on this programme.

On internationalism in YGAP:

But also, what it gives you, you get to know so many people from around the world, and it gives you something you can never measure, so it follows through the life, and there is things you don’t understand now that you have learned, or that you carry with you but you realise after a year, or after ten years, but it’s always with you all the experience, it is amazing.